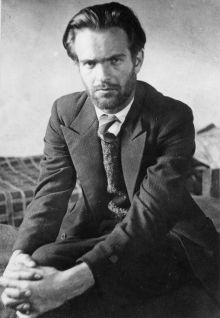 The eminent Bulgarian poet known around the world, Nikola Vaptsarov was born on 7th of December 1909 in the city of Bansko and comes from a bright family. The father – Yonko Prodanichin, takes part in the fights for national liberation in the Pirin region, and the mother – Elena Vezyova, studies in American College in Samokov and for some time works as a teacher. The little Nikola combines the virtues of the two families in his character. Since early childhood, he shows extreme sympathy that has later developed in strong love to people. This love accompanies him always and everywhere until the end of his life. Upon completing his primary education in his birth town in 1924, he is enrolled in the Part-Time Mixed High School in Razlog. This is the time of his first printed publications. He is interested in literature and dreams to study in this field, but upon his father’s will, he is enrolled in the Marine Engineering School in Varna (1926-1932). During the last year of his study, as a trainee on the Burgas ship, he travels across the Mediterranean Sea and devotes a cycle of poems called Impressions, to this trip. In 1932 he starts work in the paper factory of Balabanovi brothers in the village of Kocherinovo – as a furnaceman and then as a mechanic. Here he makes up a family with Boyka Dimitrova and their son Yoncho was born. He is fired in 1936 and they move to live in Sofia, where his small son dies on seven months. After severe unemployment, Vaptsarov is employed as a technician in the factory of Bugachevi brothers, and then works as a furnaceman in the railways and in the municipal incinerating facility in Sofia. At the beginning of 1940, he publishes his single book of poems called “Motoring Verses” published while he is still living. Except the 20 works collected in the book, Vaptsarov has left tens of other poems, the drama “The Ninth Wave”, poems for children, referats, articles, etc. His life and work are devoted to fight, to strive to establish a better and fairer world, brimming over with his faith, proverbial purifying faith, in “the good and the man”, a faith giving a meaning to human existence. After the outbreak of the Second World War in 1941, he is involved in the fight against fascism. On 4th of March 1942, more than 60 people are arrested. Nikola Vaptsarov is among the arrested. In April, while in prison, he writes his last verses: the first couplet of Before Death and Farewell. Today, both of them are among the masterpieces of the world classical literature. On the 23rd of July of the same year, the death sentence of Nikola Vaptsarov, Anton Popov, Anton Ivanov, Atanas Romanov, Petar Bogdanov and Georgi Minchev is read. Pursuant to the State Protection Act, the sentence has had to be enforced within 24 hours. On the very same evening, at the garrison shooting ground in Sofia, all sentenced meet the death with the Botev’s song: He that has fallen fighting for freedom, chooses not death! A few hours before the firing squad, the six men are given the right to write their last letters to their relatives. Five of them write such letters, and Nikola Vaptsarov does not leave a single line addressed to anybody. When death touches him, he has the power to face it openly and to write his verses. He writes the second couplet of his poem Before Death:

After the firing squad – the worms.

Thus does the simple logic go.

But in the storm we’ll be with you,

My people, for we loved you so!

Thus, until the last minute of his life, Nikola Vaptsarov doesn’t stop loving people. Later on, this love goes back to him like a real boomerang. In 1952, during the Second Congress of Peace in Warsaw, Nikola Vaptsarov posthumously becomes the winner of the Honorary Award for Peace. And on the occasion of the 100th anniversary of his birth, UNESCO announces the 2009 the Year of Nikola Vaptsarov. Today, peoble around the world does not stop being interested in the Bulgarian poet, visiting his birthplace and the house-museum, reading his poems and translating them in their mother tongues. Until nowadays, his poetry has been published more than 100 times in more than 70 languages.